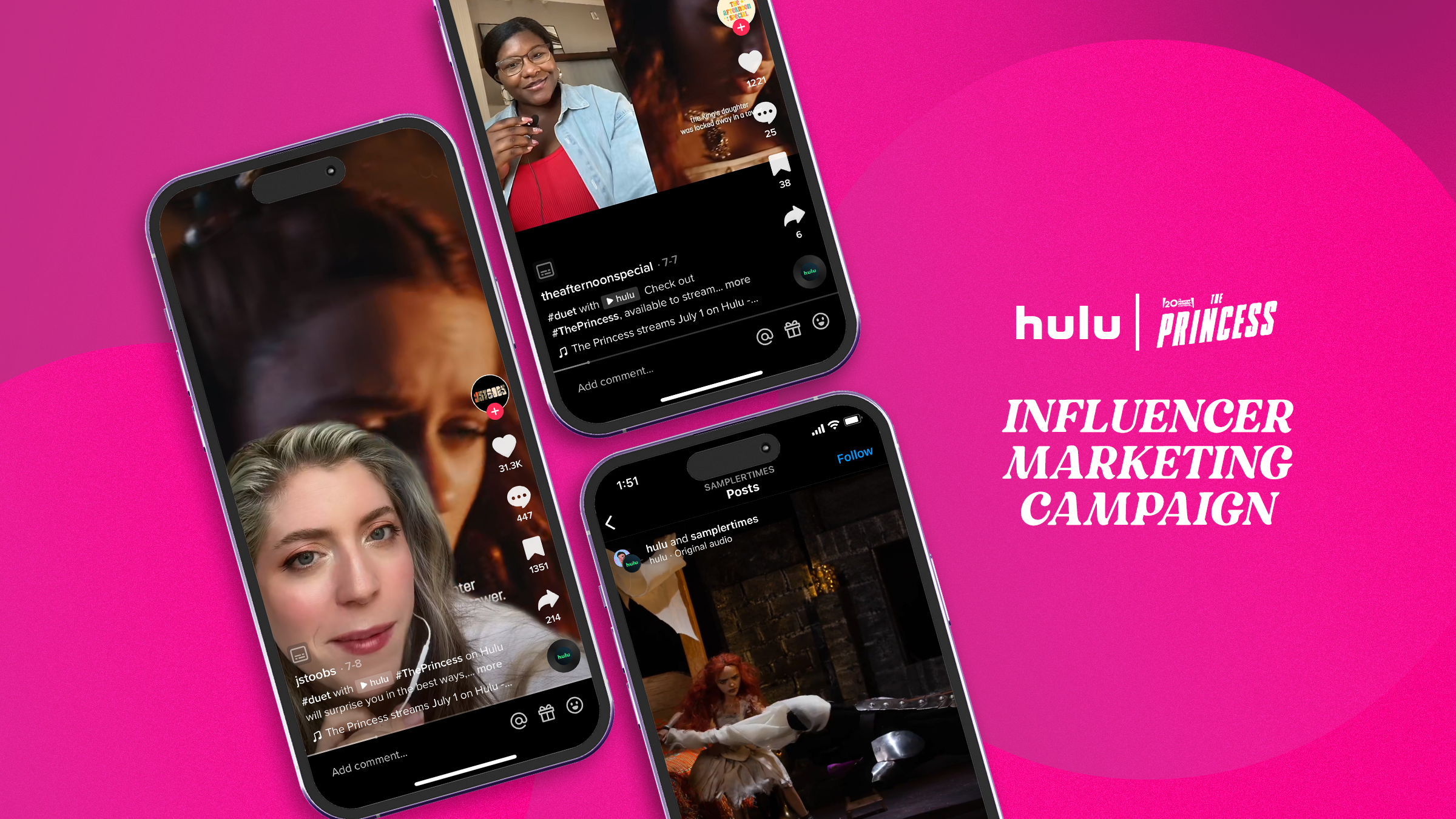 STN Digital partnered with Hulu to support the launch and increase awareness around their new  original film, The Princess through an influencer marketing campaign.Joey King stars in this action-packed female empowerment film set in medieval times. The STN team worked closely with key influencers including Lawrence Becker, Megan Cruz, and Bobbi Miller to get fans excited about the film and they did so by creating content designed to educate their followers about the film and encourage them to tune-in.

Our team strategically had each influencer create varying types of content such as custom reviews and even a creative motion post. These unique pieces of content helped expand reach to their audiences and ultimately produce engagement above industry standards.

How STN Garnered 1.32M in reach through an Influencer Marketing Campaign for Hulu’s The Princess

STN worked with Hulu to showcase early-access content from their new movie, The Princess on TikTok and Instagram. To do this, our team carefully chose three talented influencers who had extensive experience in content creation along with varying audiences to ensure diversity in reach for the film.

Lawrence Becker, who has a following of 1.9M across TikTok and Instagram, is a stop motion artist who put together an incredible visual recreation of a scene from the film. This creative motion piece was loved not only by his followers, but also received praise from the star of the film Joey King as she posted it to her Instagram Story. Lawrence also shared a behind the scenes of making Joey King come to life in his stop motion graphic that received  over 10K likes on TikTok.

@samplertimes Behind the scenes of making the badass @Joey King come to life in stop motion for #ThePrincessMovie on @hulu . #HuluPartner ♬ original sound - Lawrence Becker

Related: How a Reddit Campaign and Influencer Marketing Boosted Awareness for Season 3 of TNT’s Snowpiercer

The STN team also activated TikTok film reviewers, Megan Cruz who has a following of 456K and Bobbi Miller who has a following of 362K, to help assist in the promotion of The Princess. Both are known for routinely creating content that highlights the latest films and TV shows to stream, and their audiences go to them for recommendations. Our team strategically picked these influencers so they could naturally and authentically create content around The Princess and encourage tune in with their audiences.

Our team also worked closely with them in the weeks leading up to the film’s release to ensure they were prepped and ready to create quality content upon premiere. STN worked with TikTok film reviewers who highlighted The Princess film with positive ratings to ensure that it was well received by their respective audiences. This included constant communication with influencers, providing timelines and film release dates, and ensuring all content was created for a quick turnaround.

Megan and Bobbi both highlighted The Princess in a very positive way that was unique and tailored to their prospective audiences. This greatly assisted in spreading awareness of the Hulu movie.  The campaign was a success due to the mix of content created across platforms and the significant reach the influencers achieved to spread awareness.

@jstoobs #duet with @hulu #ThePrincess on Hulu will surprise you in the best ways, check it out now streaming on Hulu and drop your reactions in the comments! #HuluPartner ♬ The Princess streams July 1 on Hulu - hulu