How to Make Twitter Spaces Work for Your Brand 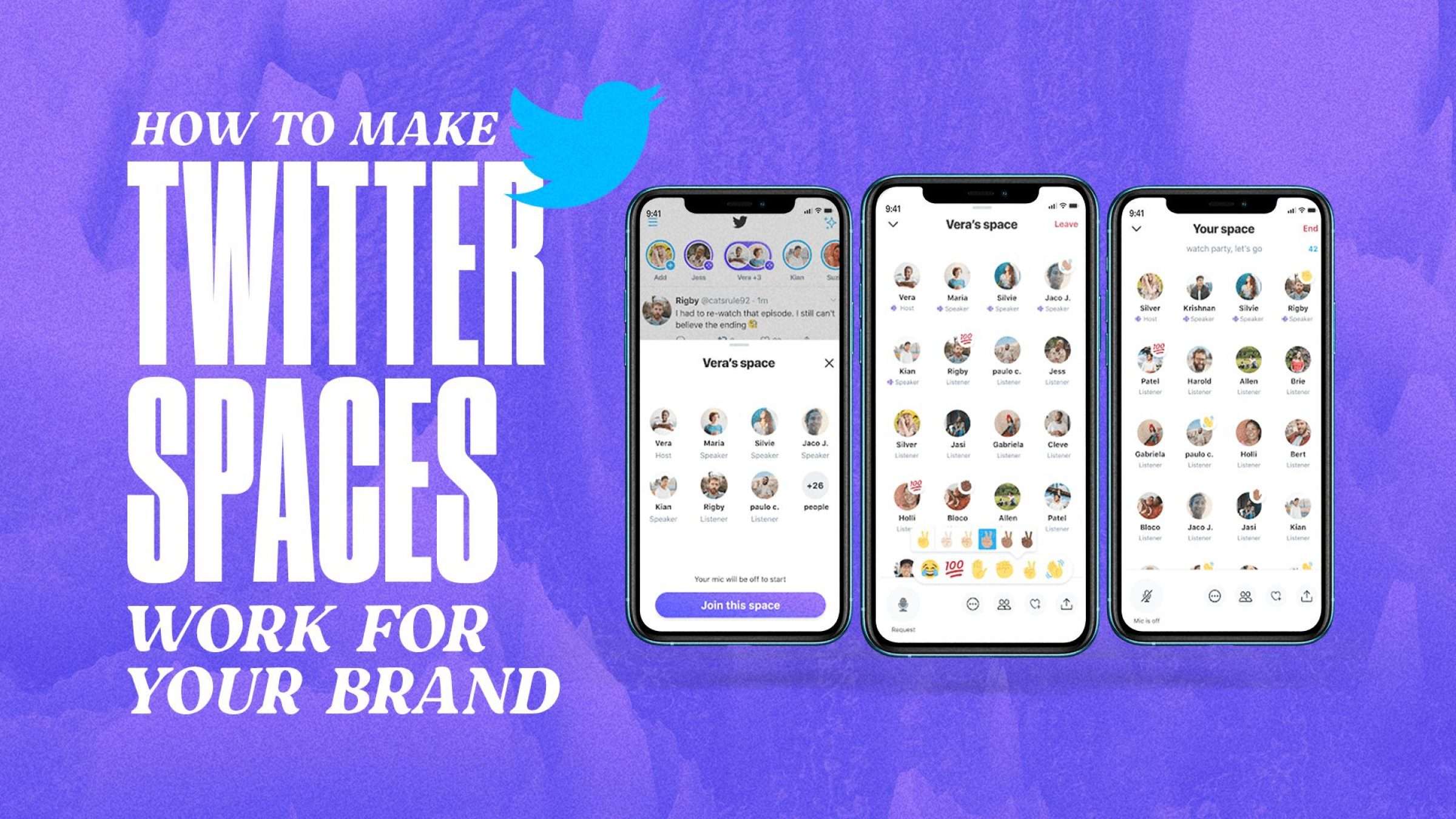 If you’ve made it this far in 2021, you’ve likely heard about the audio-only social trend that started with Clubhouse and is now making its way to every major platform. Facebook, Spotify, LinkedIn, and Reddit are all working on audio-based products and features, but perhaps the most notable, and most used, is Twitter’s audio-only feature, Spaces.

Twitter is still working out some kinks and frequently rolling out updates, which means now’s the time to dive in and see how you can incorporate Spaces into your social strategy. In this guide, we’ll walk you through how Spaces work, give some best practices, and highlight a few ways brands and organizations are already using Spaces.

What Is Twitter Spaces and How Does It Work?

Launched in November 2020 and now available to all users with 600+ followers, Spaces allow for more human and real connection on a platform that’s limited to 280 characters. Twitter said, “Sometimes 280 isn’t enough and [Spaces] gives people another way to join the conversation.”

Spaces can be started instantly or scheduled up to 14 days in advance. Scheduling a Space can be useful if you’re looking to raise awareness and participation for a one-off Space. Encourage your followers to turn on notifications for your profile so they won’t miss out on any of the action. Once you’re live, you’ll instantly be at the top of their timeline. When naming your Space make sure it’s descriptive and gives context on what users can expect to hear.

Up to two people can become co-hosts in a Space in addition to the 11 speakers (including the host) at one time. Hosts can also transfer primary admin rights to another co-host. This is especially important for those Spaces that need additional moderation.

Beyond speaking in a Space, there are several ways to interact both as a host and listener. Participants can send Twemojis and share tweets. Users can utilize the “raise hand” feature to not talk over others. Twitter also recently announced that users who are over 18, have hosted three Spaces in the last 30 days, and who have at least 1,000 followers will have access to sell ticketed Spaces.

Twitter allows users to include any sort of media when announcing a scheduled Space. Consider creating an eye-catching graphic that outlines all the event details to get users engaged and excited.

Users can also post their scheduled Space without additional graphics. When the Space goes live it’s showcased in a bubble below the tweet. Once it’s over, it will say ‘Space ended’ on a blank background.

Depending on the look and feel of your profile you may want to leverage a graphic to avoid having the blank ‘Space ended’ bubble. 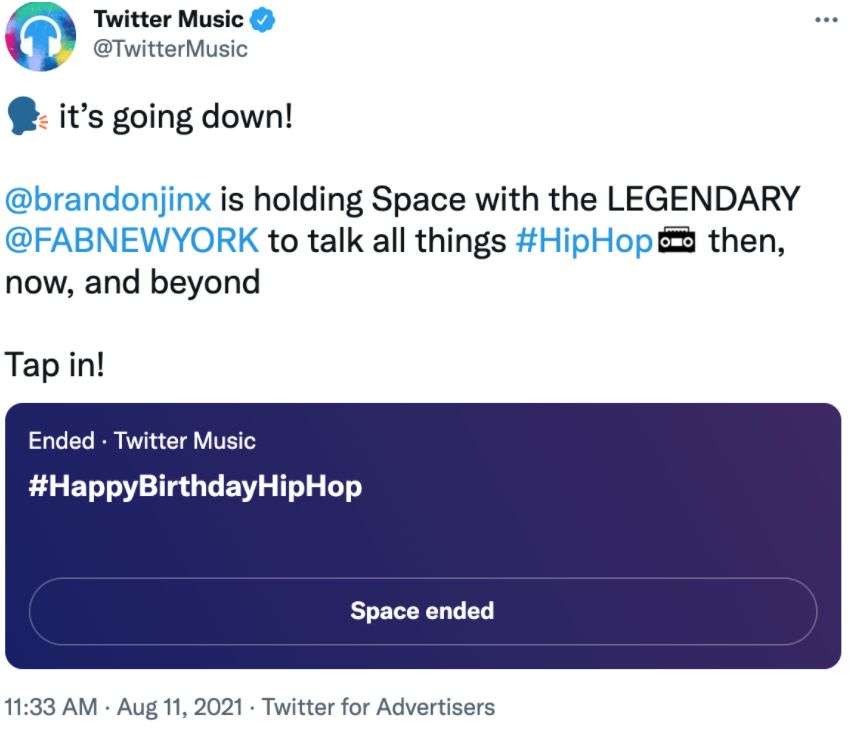 2. Stick to a Schedule

Develop a cadence for your Spaces. Whether it’s every day, once a week, or once a month, hosting regularly scheduled Spaces allows followers to look forward to and become more engaged with your Space. This appointment viewing tactic creates awareness with fans, drives behavior, and can help your Space reach more users consistently over time. 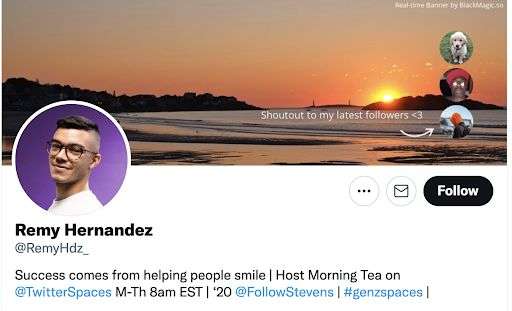 This seemingly simple tactic has the power to make or break your Space. And it’s quite simple; let your host be the host and add a designated co-host to deal with moderation and the admin side of things. This allows your host to focus on the content and discussion of the Space without worrying about adding or removing listeners and tweets. The co-host makes sure things are running smoothly and that the Space is safe and inclusive for all in it.

How Brands and Organizations Are Using Spaces

Brands and organizations are beginning to engage with Spaces as more people embrace the audio-only trend. Spaces offer a direct line of real-time communication with followers and fans and that holds a lot of power for groups who get it right. Here are a few ways organizations have started using Spaces.

The Raptors took to Spaces to host a fan forum ahead of the 2021 NBA Draft. Fans had a lot of feedback on upcoming draft picks and on the direction they’d like the team to go. The forum allowed fans to express their opinion and be heard by the team. When fans are able to express their thoughts and hear from the team directly it can help cut down on feedback and replies to every tweet.

MLB leveraged their content creators to host a Space providing insight and breaking updates on the MLB Trade Deadline. This breaking news forum can be a great resource for teams needing to update followers quickly and in real time.

Universal Pictures used Spaces to host a discussion with followers around the theatrical re-release of Scott Pilgrim vs. The World. The Space was led by the film’s co-writer, producer, and director Edgar Wright who also brought along members of the cast. Fans were able to ask questions and discuss the film alongside those who made it possible.

Some ideas on how your brand or organization can use spaces:

As we all know, whenever a platform rolls out a new feature, those who are early adopters typically see an increase in views, engagements, and even followers thanks to the algorithm. Now’s the time to test out Spaces and reimagine how you’re connecting with your audience.

STN Digital is an expert at launching brands and building highly engaged audiences. If you’re interested in learning more about how STN can help you, send us an email at info@stndigital.com or fill out the form below: